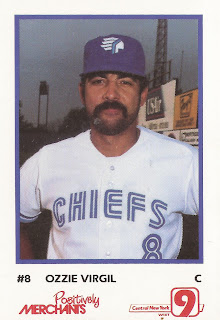 Catching the ball, Virgil braced for impact. Virgil held on against the "Mack truck" Winfield, tagging him out and sending the game into extras. The National League went on to win the game in the 12th.

"You don't think about getting hit," Virgil told The Associated Press after the game. "He kneed me in the right side. I've got a little bruise there. That's the price you have to pay. We don't wear padding like football players."

It was likely one of many bruises the catcher would receive in a career behind the plate that spanned more than a decade. It was a career in which Virgil would play on two All Star teams, in three World Series games and have one amazing run at the plate, hitting eight home runs in eight games in 1987.

The son of Dominican baseball pioneer Ozzie Virgil Sr., Ozzie Virgil Jr.'s career began in 1976, taken by the Phillies in the sixth round of the draft. Virgil played that year at short-season Auburn. He made AA Reading in 1979. He made his debut in Philadelphia with one game to close out the 1980 season.

He returned to Philadelphia for six more games in 1981, before getting his first extended major league playing time in 1982, hitting .238 in 49 games. For 1983, the year the Phillies returned to the World Series, Virgil played 55 games and hit .214.

In early September 1983, Virgil helped the Phillies to a win, hitting a walk-off grand slam against the Giants. He also got into three World Series games, getting to bat twice.

Virgil went into 1984 lucky to be in Philadelphia, or anywhere. His right hand was grazed by a stray bullet fired into the air during New Year's celebrations in Puerto Rico.

The incident, however, appeared to have no impact on his play. In fact, Virgil became the Phillies' regular catcher for 1984, playing in 141 games, hitting 18 home runs and posting an average of .261. On May 5, Virgil went 3 for 3, hitting two home runs, knocking in five.

"Sure, this was my best game in the big leagues," Virgil told The Allentown Sunday Call-Chronicle after that May performance. "My role with this team has always been to fill in, so the fact that I'm hitting well now has a lot to do with the fact that I'm playing a lot more (with Bo Diaz on the disabled list). Knowing that you're gonna be playing the next day makes you a little more confident."

It was in 1987 that Virgil had his amazing run at the plate. In May, he hit eight home runs in eight games, on his way to a career high of 27 on the season.

"I'm not doing anything I'm not capable of doing," Virgil told The AP after hitting his eighth home run in the streak. "I'm just letting it happen. You just need to let yourself relax and do what you're capable of doing."

Virgil, though, only had one more full season left. In 1988, his last with Atlanta, Virgil hit .256, with his home run production dropping back to nine. Signing with the Blue Jays for 1989, Virgil got into nine games that year and three the next, ending his career.