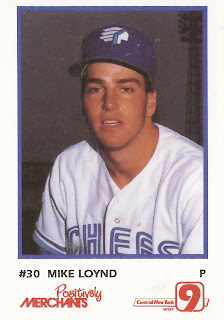 A star in college, Mike Loynd made the majors quickly. He was called up to play for the Rangers the very month after he was drafted. But he was called up amid nagging questions about his velocity.

Loynd was confident he would get beyond those questions.

That spring, at Florida State, Loynd was 20-1 by early June. He ended at 20-3. He also had 223 strikeouts and won the College Pitcher of the Year award from Baseball America, The News wrote.

But, despite his success in college, he wasn't taken until the seventh round, by the Rangers. Loynd believed he should have been taken earlier.

Loynd was upset that scouts believed his fastball wasn't fast enough, The Sun-Sentinel wrote in June 1986. Still playing in the College World Series, Loynd set his sights on his next opponent, Arizona, to prove the scouts wrong.

"My fastball has been clocked at 86-88 mph," he told The Sun-Sentinel that June. "But (against Arizona) I might have to throw my multipurpose pitch inside and light up the JUGGS gun. Somebody might have to catch one on the side of the head."

But, what he lost in draft status, Loynd gained in minor league placement. He left Florida State for AA Tulsa. By the end of July, he was in Texas.

After being called up, Loynd called the talk of his anger over his draft placement a joke and overblown. Whatever it was, he quickly took that show of confidence from the college mound to the major league mound.

Loynd went on to appear in nine games for the Rangers that year, starting eight. He struck out 33 in 42 innings, and went 2-2 while posting an ERA of 5.36.

He returned for spring training in 1987, Loynd was confident still.

"I've been called cocky, stubborn and strong-willed," Loynd told The Sun-Sentinel that spring. "What it comes down to is I love to compete and win. That's the fun of pitching."

Loynd made the team, but he was moved to long reliever. He also sat. He pitched April 10, but not again for almost two weeks, on April 23.

Loynd came into that game against the Orioles, and got the win.

"I was getting like fine wine, sitting around and aging in the pen," Loynd told The AP afterward. "I was getting up and throwing every game, but I never got the call. I was really surprised to get in there tonight."

Loynd went on to pitch in 26 contests for the Rangers in 1987, starting eight of them. His ERA topped 6. They were his last 26 appearances in the majors.

The next spring, the Rangers shipped Loynd to the Astros. He played the year at AAA Tucson, going 3-12. In 1989, Loynd moved backward, to AA Columbus. He returned to AAA for 1990, with the Blue Jays, at Syracuse.

The Cardinals, Braves and Expos systems brought him to spring 1995. Then, Loynd was with the Twins. The once-promising pitcher was a replacement player.

"I still believe I can pitch," Loynd told The Sun-Sentinel that March. "I guess I'll keep beating my head against the wall until somebody tells me not to come back anymore."

After that spring, Loynd's career ended. He didn't make it back.