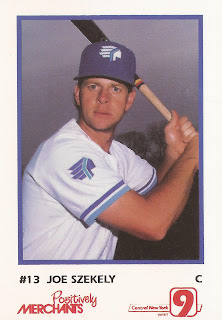 Joe Szekely grew up on baseball, his dad was a professional player and he'd always gravitated toward it, Szekely told The Bluefield Daily Telegraph in February 2008.

Szekely spoke as he took the reins of the rookie-league Princeton Rays, continuing a baseball career that began 26 years earlier when he was drafted as a player.

"I played it while I was growing up and I guess the fact that I was around it so much that it just kind of rubbed off on me," Szekely told The Daily Telegraph. "There's nothing like it, it’s the one game I think that I would say everybody can relate to because it just seems like everybody you have talked to has played some kind of baseball somewhere."

Szekely has been in baseball almost continuously since his college days at Texas A&M. He never made the majors, but one tantalizing September, he almost did, according to newspaper accounts.

Szekely batted .356 and hit 13 home runs for the Aggies. He also played in Alaska for the Goldpanners. It was enough for him to catch the eye of the Royals, who selected him in the second round of the 1982 draft.

He stayed with the Royals just two seasons before he was shipped to the Dodgers for 1984, where he remained through 1989. He played at single-A Bakersfield in 1984, slicing a double in an April game to key a three-run inning, according to The Modesto Bee.

It was in 1991 that Szekely almost made the majors. He played the year with AAA Richmond, hitting .260 in 83 games. He had two hits in one inning in an August game he had a two-run single in another.

So, by September, the Braves called and he was pegged to join a major league club for the first time, according to a wire report. Then the Braves changed their mind, The Atlanta Journal-Constitution wrote. He didn't get called up after all.

In 1992, Szekely's final year as a player, he became a player-coach on the Richmond Braves, The Richmond Times wrote. From there, he stayed on with the Braves as a minor league coach. He later became a coach with the traveling women's baseball team the Colorado Silver Bullets and the independent Somerset Patriots, a team that didn't have a home.

With the Silver Bullets, Szekely noted the women on the team were more supportive then the male players. "I never saw guys rooting for each other," Szekely told The New York Daily News in 1997.

Back in his job with the Princeton Rays in 2008, Szekely oversaw Rays top draft pick Tim Beckham, a development that continues to go slowly. But Szekely had praise for him with Princeton.

"In batting practice if you throw a couple balls on the inner half and it gets in on him a little bit, he's going to take that as a personal challenge and turn those balls around," Szekely told Baseball America. "He's got that competitiveness, he's got that drive, he's got that want-to and that work ethic."