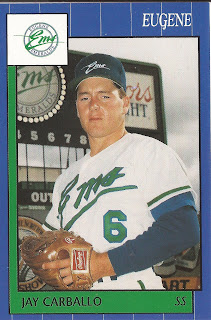 And he learned valuable lessons in the process, Carballo told The Times.

"I had always been taught to just catch the ball and throw the runner out," Carballo told The Times that June. "But when I started working with (assistant coach) Dave (Malpass) in the morning, I learned that there are a lot of little things that make it easier."

Carballo took those little things from Long Beach to the pros in 1990. His pro career, however, was brief. He played a single season.

Carballo's pro career began and ended that year in 1990, signed by the Royals as an undrafted free agent out of Cal State Long Beach. He also played at Glendale Junior College and was sometimes credited by his given name Julio Carballo.

Carballo played his season with the Royals at short-season Eugene. In July, his defense received praise from rival Boise manager Tom Kotchman, according to The Eugene Register-Guard.

"Their center fielder made a nice catch to stop a threat in the second and their shortstop (Carballo) made some nice plays," Kotchman told The Register-Guard.

Later that summer, it was his bunting that received notice as his own manager Kirsch called him one of his team's two best after a successful suicide squeeze, according to The Register-Guard.

"I had to get the bunt down," Carballo told The Register-Guard afterward with a grin, "If I didn't, it was going to cost me some money."

Overall, Carballo got into 53 games for Eugene. He hit .216, two home runs and knocked in 11 to mark the extent of his career.