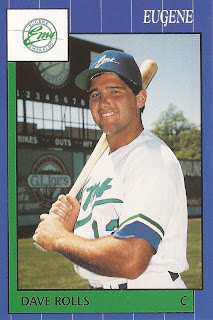 David Rolls started the 1990 season for short-season Eugene slow. He'd gotten into only 11 games by mid-July, but in his 11th appearance, the catcher seemed to finally fit in, according to The Eugene Register-Guard.

He did so with two hits, one a double, and he drove in a run, The Register-Guard wrote. He also threw out four runners trying to steal.

"It felt good to contribute," Rolls told The Register-Guard. "It was a long time coming."

Rolls went on to a career that fit into seven seasons. He briefly saw AAA, but he never got to attempt to fit in in the majors.

Since his baseball time, though, Rolls has found a way to fit into a different kind of career, essentially allowing others to do so. Rolls founded his own jigsaw puzzle business that he continues in 2018.

Rolls' baseball career began in 1988, taken by the Royals in the 13th round of the draft out of the University of San Diego.

At San Diego, Rolls hit 18 home runs and knocked in 70, both single-season records. To The Los Angeles Times after being drafted, Rolls indicated he looked forward to turning pro.

"I was told by some scouts that I would be drafted, so I was expecting it," Rolls told The Times. "I think most little kids dream of playing pro baseball, and now the opportunity is in my hands."

Rolls played his first season at Eugene in 1988, arriving in a downpour. He got into 35 games that year and hit .171. He then underwent back surgery and lost all of 1989.

Rolls then returned briefly in 1995 and got his only time at AAA, two games at Oklahoma City to end his career.

That same year, Rolls founded the puzzle company MasterPieces, Inc., based in Arizona. The company has since expanded into other areas, including games and wood toys.

In July 2018, the company announced a new line of MLB and NHL shaped puzzles.

"All puzzle enthusiasts and sports fans can find the enjoyment and challenge of our new shaped puzzles," Rolls said in a statement announcing the lines. "We're pleased to be able to offer these high quality selections to our ever-growing sports licensed product offerings. We expect them to be among our best sellers this year."
1990 Minor League Tally
Players/Coaches Featured: 2,985
Made the Majors:1,097-36.8%
Never Made Majors:1,888-63.2/%-X
5+ Seasons in the Majors: 455
10+ Seasons in the Minors:275
Posted by Steve78 at 10:45 PM