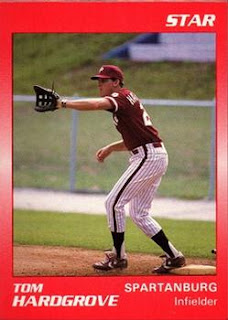 The pitch was a change-up, but it was the pitch Tom Hardgrove wanted, he told The Nevada Daily Mail in 1987.

Whatever the pitch was, Hardgrove ended up depositing it over the wall, picking up his 23rd home run on the season, and his share of the collegiate league's season home run record.

"I knew it was gone when I hit it," Hardgrove told The Daily Mail that July. "It felt real good."

Hardgrove went on to play at Texas Christian University, and play well enough to get drafted by the Phillies. But Hardgrove couldn't transfer that home run success he saw at Nevada to the pros, his career lasting just two seasons, hitting just 18 total home runs over that time.

Hardgrove's professional career began in 1989, with the Fort Worth-native taken by the Phillies in the 12th round out of TCU.

During that summer in Nevada in 1987, Hardgrove helped himself get to that home run record by once hitting three home runs in one four-game stretch. After that June show, Nevada manager Sam Riggleman praised his young hitter to The Daily Mail.

"He's been outstanding," Riggleman told The Daily Mail of Hardgrove. "It's mainly because he has a great approach to what he's doing. He's simply a good offensive player."

With the Phillies, Hardgrove started at rookie Martinsville, getting into 61 games. He ended up hitting 13 home runs in that time, knocking in 45. He also hit .286.

For 1990, Hardgrove moved to single-A Spartanburg, but he couldn't keep up that hitting. In one early contest, he went 0 for 3 with a walk and run scored.

On the year, Hardgrove hit just .205, with five home runs, knocking in 47. That year ended up being Hardgrove's final year as a pro, his career ending after just two seasons.