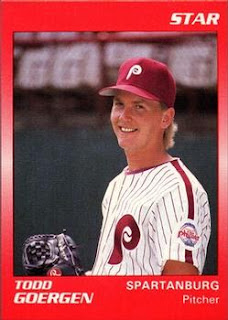 Todd Goergen's first start of 1993 happened to coincide with that season's first fireworks promotion, according to The Allentown Morning Call.

Goergen was starting his first year at AA in the Phillies organization, in his sixth season as a pro.

But, while Goergen's first AA start was followed by fireworks, his career itself had few fireworks left in it.

Only three starts into that season and injury claimed Goergen's season. He had just part of one season left.

Goergen's professional career began in 1988, taken by the Phillies in the 20th round of the draft, out of Trinidad State Junior College.

Goergen played that first season at rookie Martinsville, going 1-5 in 14 outings, with a 6.69 ERA. He moved to short-season Batavia for 1989, getting just seven outings, all starts, posting a 3.57 ERA.

For 1990, Goergen played his first of two seasons at single-A Spartanburg. He went 7-8 both years, over 18 starts his first campaign and 23 his second.

He picked up his first 1990 win in April, with a five-inning outing against Sumter, then a 1991 win as part of a double header.

For 1992, Goergen's fifth season as a pro, he moved to high-A Clearwater. His career also saw some of its last fireworks on the field. Goergen went 7-7, but had a respectable 3.19 ERA over 23 starts. He started the year 4-0, picking up his fourth win in a May six-inning outing.

Goergen's 1993 campaign, his first at AA Reading, ended up lasting just three outings. He went 2-1, giving up six earned runs in 17.2 innings of work, including a six-inning, late-April win. Then he went to the disabled list.

Goergen returned for part of just one more season. In 1994, he picked up eight relief outings back at Clearwater. He gave up three earned runs in 11 innings, ending his career.