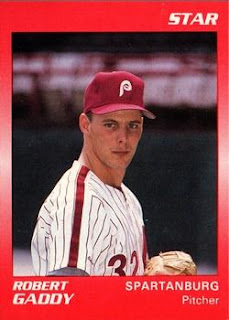 Robert Gaddy tried to explain to The Reading Eagle in 1993 his early success on the year.

The early success included a 19-inning streak of scoreless innings in early May, and a 0.42 ERA.

"In years past, I really haven't had a breaking ball," Gaddy told The Eagle. "This year, I've got a slider that I can throw any count. I'll throw it 3-2 on anybody. That's really given me a lot of confidence."

Gaddy had that early success in his fifth professional season. Later that year, that success would lead to Gaddy's first time at AAA. Gaddy's career, though, extended just two more seasons. He would never have enough success to make the majors.

Gaddy's career began in 1989, taken by the Phillies in the 41st round of the draft, out of the University of Tennessee.

Gaddy started that year at short-season Batavia, serving mostly as a starter. He made single-A Spartanburg for 1990, going 9-7 in 30 outings, 19 starts. He also picked up a two-inning save in an April outing.

For 1991, Gaddy moved to high-A Clearwater, and got his first look at Reading. Between the two, he got 44 outings and a 2.95 ERA. That April, with Clearwater, Gaddy even had a hand in a no-hitter against Baseball City.

Gaddy played 1992 back between Clearwater and Reading, then 1993 between Reading and AAA Scranton. For 1993, Gaddy also tried his hand again at starting, getting 11 starts on the year. That August, with Reading, he went 8.2 innings in one start, giving up just two hits in a 1-0 win.

For 1995, though, Gaddy started off slowly. In two starts, he went just four innings, according to The Wilkes-Barre Times Leader. His manager Mike Quade wasn't sure what was going on.

"I don't think anybody can sit back and figure out what went wrong, what the problem is, except that it's early," Quade told The Times Leader. "We just have to get back to where he was last year, and at least we have something to get back to."

Gaddy, though, couldn't recover. He ended up getting 17 starts, finishing with an ERA of 6.28, ending his professional career, without making the majors. A native of Pensacola, Fl., Gaddy is recorded as coming out of retirement for five starts for his hometown independent team in 2002, finally ending his career for good.