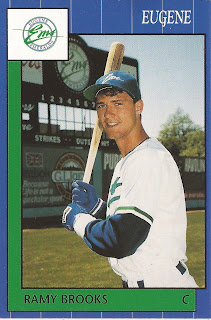 Ramy Brooks won honors on the field in high school, but he also got into trouble off it, The Oklahoman wrote.

He won little all-city honors in 1988, for the second year running, and won high praise from his coach. But he also lost six games the previous year to a hand injury suffered in a fight, The Oklahoman wrote.

"I promised myself I was going to stay away from that kind of thing, and I have," Brooks told The Oklahoman that June. "I've found other things to do, grown up a lot and learned that going out and looking for fights is only going to hurt me."

Brooks played well enough to turn pro two years later. And, despite a similar incident during his first pro season, he went on to play in nine campaigns. He briefly made AAA, but he never made the bigs.

Brooks' career began in 1990, taken by the Royals in the 25th round of the draft out of El Reno Junior College. He played his high school ball at Blanchard High in Oklahoma. Brooks was also credited by his given name, Raymond Brooks.

He played baseball, football and basketball in high school and lettered in all three.

With the Royals, Brooks started at short-season Eugene. He played in 10 games, hit .103. He then lost the rest of the season to suspension. He got into a fight with teammate Shayne Rae, according to The Eugene Register-Guard.

He then hit single-A Rockford. That August, The Tulsa World noted he'd hit seven home runs since the all-star break alone. He'd hit four in the first half. Overall, he hit .255, with 15 home runs and 34 doubles.

Brooks moved to high-A High Desert for 1994, then high-A Wilmington in 1995. Late in 1995, Brooks got an added chance after the regular catcher Mike Sweeney got called up. Brooks' manager John Mizerock saw Brooks as being able to capably step up.

"Sure, I'd like to see Sweeney up there with guys on base, but that's yesterday's news . . . Ramy's been swinging the bat good the last couple of weeks," Mizerock told The Wilmington News Journal.