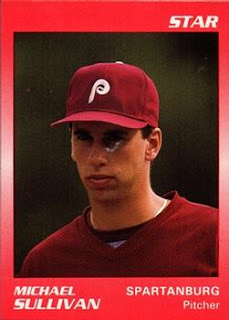 Mike Sullivan led the Spartanburg Phillies in saves in June 1990. This, though, wasn't a save situation.

Coming on in the ninth inning with a six-run lead, Sullivan proceeded to finish out the game by narrowing down that win to three runs. It was an outing that concerned Sullivan's manager Mel Roberts, according to The Spartanburg Herald-Journal.

"I'm not disappointed that they came back," Roberts told The Herald-Journal. "But I hope it's a lesson learned. We've got to close the door a little tighter."

Sullivan learned that lesson in his second professional season. He went on to play in seven seasons as a pro, but he never learned enough to make the majors.

Sullivan's career began in 1989, taken by the Phillies in the 11th round of the draft, out of North Lake Community College in Texas.

With the Phillies, Sullivan started at short-season Batavia. In 24 outings there, Sullivan posted a 2.96 ERA with five saves.

He moved to single-A Spartanburg and high-A Clearwater for 1990, getting 35 outings between them and a 3.55 ERA. He picked up his second save for Spartanburg in late-April. Overall, he saved eight for them and three more at Clearwater.

Sullivan spent 1991 full-time at Clearwater, picking up 11 saves, one a two strikeout, rally ending outing that August. Sullivan then made AA Reading in 1992, splitting time that year with Clearwater.

Sullivan's time at Reading in 1992 marked the first of four seasons where Sullivan played at AA, but he never got higher.

He got 31 outings for Reading in 1993, then played between Reading and AA New Britain with the Red Sox for 1994. He picked up a win in relief for New Britain in June 1994, walking two but ending the 1-0 victory.

Sullivan, though, played in just one more season, 15 outings with the Red Sox in 1995 at AA Trenton, ending his career.