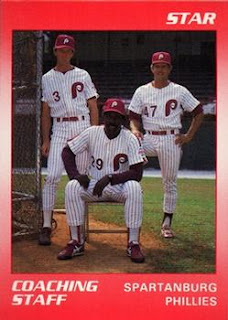 Mel Roberts first embarked on his road to the major leagues back in 1961 as an outfielder in Artesia, NM, in the Class D Sophomore League.

Roberts never got above AA in that playing career and went on to a long career coaching and managing in the minors.

That career stayed in the minors, until 1992, when Roberts finally broke through, named first base coach for the major league Philadelphia Phillies.

"There's no use in being in this game unless you want to be in the big leagues," Roberts told The Spartanburg Herald-Journal at the close of his first major league spring in 1992. "And I'm here."

Roberts remained there for four seasons, following the Phillies to the 1993 World Series. Roberts then stayed in baseball, returning to the minors, up until his passing in 2007, at the age of 64.

Roberts' baseball career began back in 1961, when he was signed by the Dodgers. He stayed in the Dodgers system through 1964, playing that last year between single-A Santa Barbara and single-A Salisbury.

He then returned in 1966 with the Phillies, making AA Reading only briefly in 1970, his final year as a player.

Roberts, though, quickly turned to coaching. By 1980, he was a decade in and a coach with the Phillies at single-A Spartanburg. Late that August, Roberts' team was fighting for a playoff spot, but not hitting in a 5-1 loss.

"We haven't been swinging the bats like we're capable of doing," Roberts told The Herald-Journal afterward. "We've hit a slump at the wrong time. We just have to keep battling and every day hope that it's our night. And tonight sure wasn't our night at all."

By 1987, Roberts was a manager himself, at short-season Bend. He returned to Spartanburg as manager in 1988, staying there through 1991. He then got his appointment as Phillies first base coach in Philadelphia.

Roberts left Spartanburg a major leaguer, but he also left an institution, according to The Herald Journal. In 1988, as he started his first season as manager, the paper described how he'd earlier helped keep baseball in Spartanburg and even helped change out seats in the late 1970s during ballpark renovations.

Roberts ultimately spent four years as first base coach in Philadelphia, before returning to where he coached the most, the minors. Roberts moved to the Braves organization, coaching much of the next decade at AA Greenville. He also got a season at AAA Richmond.

In 2005, he moved to rookie Danville, serving as hitting coach there. He then continued there until his passing in September 2007.

Back in 1988, as he took over the managerial job at Spartanburg, Roberts spoke to The Herald-Journal about his role as a minor league manager.

"As long as I develop and see progress in my players I know we will win our share," Roberts told The Herald-Journal. "It's such a fine line between winning and developing. You can't develop without winning and you can't win without developing."