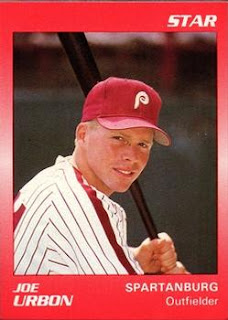 Speaking of one of his contractual adversaries in 2011, Blue Jays GM Alex Anthopoulos had nothing but respect for Joe Urbon, according to Seattle Business Magazine.

"He's a good communicator and a straight shooter when you deal with him," Anthopoulos told Seattle Business. “He does a good job for his clients. At the same time, he’s a realist. He knows what clubs can do and what they can't. When you’re negotiating with him, you can trust what he says."

Urbon has been serving in his current career as a sports agent almost since his brief playing career ended to injury, according to Seattle Business.

That brief playing career lasted just three seasons and never saw Urbon get above high-A. His career as a sports agent has seen him get higher, representing such players as Grady Sizemore and Jason Bay.

Urbon's professional career began in 1989, taken by the Phillies in the 17th round of the draft out of Washington State University.

At Washington State, Urbon, who became an outfielder, was also a pitcher. He started one game, picking up a win after going six.

With the Phillies, Urbon started at short-season Batavia, hitting .192 in 32 games. For 1990, Urbon split time between single-A Spartanburg and high-A Clearwater.

In April 1990, Urbon had a modest 6-game hitting streak for Spartanburg. He also earned the respect of his opposing pitcher in that sixth game.

"Spartanburg is a super-hitting ball club," Columbia Mets hurler Joe McCann told The Spartanburg Herald-Journal after that sixth game. "The last guy I faced (Urbon) fouled off six or seven pitches and really battled me. I have a lot of respect for their hitting."

On the year, Urbon hit .257, knocking in 39. For 1991, Urbon started at Clearwater, playing 28 games there. He then played 19 games at independent Reno. They were the last games of his playing career, injury cutting his efforts short.

Urbon has since gone on to his long career as a sports agent, landing Jason Bay his large $65 million contract with the Mets after 2009. In December 2012, Urbon was tasked with helping rebuild Bay's career.

In 2007, Sports Business Daily asked Urbon to compare his playing days with his agent experiences. Urbon focused on the competition.