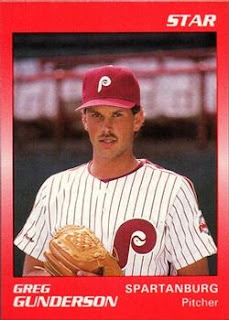 Greg Gunderson's star pitcher Mark Mulder did just that, starred on the mound.

But, when the Michigan State hurler wasn't pitching, the team tried to work him into the game in other ways, in the field, Gunderson told The Minnesota Daily in 1998.

"It's kind of a gameday decision," Gunderson, the school's assistant coach, told The Daily. "We see who is pitching."

Mulder would go on to a major league career that spanned nine seasons, and saw Gunderson follow to assist after injuries popped up.

Gunderson's career began in 1988, signed by the Phillies as a free agent out of the University of Cincinnati. He then is recorded first getting on the field during the season in 1989, at short-season Batavia.

At Batavia, Gunderson got into 13 relief appearances, posting a 3.28 ERA. For 1990, he moved to single-A Spartanburg, getting into 38 games there, with a 2.06 ERA. That July, Gunderson even earned organization Pitcher of the Month honors, with a 0.48 ERA on the month.

From that Spartanburg ERA, Gunderson moved up to high-A Clearwater. In 10 outings there, though, Gunderson's ERA jumped to 7.80. It was also Gunderson's final year as a pro.

Gunderson then returned to Cincinnati as a volunteer coach. He also coached in the Arizona Summer Collegiate League, then served as an assistant coach at Eastern Kentucky, according to his Michigan State profile.

By 1998, Gunderson was assistant coach at Michigan State, watching over Mulder. Years later, in 2009, as Mulder tried to make it back for another season after injury, it was Gunderson who worked with him to try and get Mulder back.

In 2001, as Mulder had his breakout season with the Athletics, it was Gunderson who was credited with pointing Mulder in the right direction in college, getting Mulder into the summer Cape Cod League in 1997, according to The San Francisco Chronicle.

"That's kind of when," Gunderson told The Chronicle, "Mark figured out he was as good as anybody else."