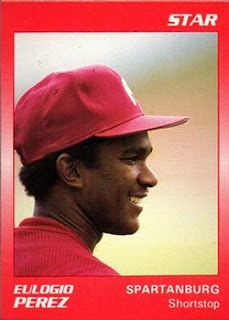 It was part of a 9-1 victory for Perez' Spartanburg Phillies, one of 22 appearances Perez had for the club that year.

Perez was in his third professional season that year with Spartanburg. He would only get one more. He also wouldn't see time above single-A.

Perez' professional career began in 1988, signed by the Phillies as an undrafted free agent out of his native Dominican Republic.

He started at rookie Martinsville, getting into 14 games there, hitting just .176. He then returned there for another 40 games in 1989, hitting .201. Perez also saw time that second campaign at short-season Batavia. He hit .120 there.

In 1990, he started at single-A Spartanburg, getting into 22 games, hitting .187. Perez, though, received praise for his fielding. Roving infield instructor Dave Cash in May counted Perez among an impressive infield, according to The Spartanburg Herald-Journal. By that time, though, Perez was off in Clearwater, working on his hitting.

Perez' hitting, though, never improved. He got into 37 games at short-season Batavia that year, but still hit just .187.

In 1991, what turned out to be his final pro season, Perez returned to Spartanburg, but got into just 14 games, ending his career.