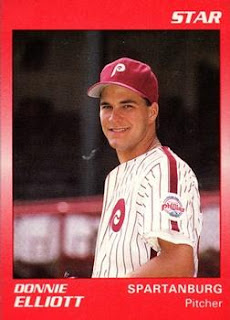 When Donnie Elliott made the majors for the first time in 1994, he was not necessarily surprised he was there, but surprised at how he was being used, he told The Pasadena Citizen years later.

He was debuting as a starter, which he had long been in the minors. But that year at AAA Las Vegas, he'd been used as a reliever.

"I was in shock. In triple A, I pitched out of the stretch," Elliott told The Citizen. "It was Batting Helmet Day or something. It was a little bigger crowd than what they had been having. I wasn’t as nervous as I thought I’d be."

Those 30 outings also ended up being nearly the extent of his big league career, getting just one more outing the next year, making 31 total on his career.

Elliott's professional career began back in 1988, taken by the Phillies, signing that May, after being taken in the seventh round of the previous year's draft out of San Jacinto College.

He started at rookie Martinsville, getting into 15 games, starting 10. He moved to short-season Batavia and single-A Spartanburg, turning full-time starter and posting a 1.88 ERA between them over 15 starts, arm problems limiting his season.

Elliott didn't make AA, though, until 1992, at Reading. He was also traded that May to the Braves, sent to AA Greensboro. The next year, Elliott looked to take the next two steps, to AAA and the majors.

With the Braves, though, there was no real need for a starter in Atlanta, The South Florida Sun-Sentinel noted, something that had Elliott concerned.

"I know I have no chance to make the team, and that is sort of frustrating. With the pitching staff they have here there is no way," Elliott told The Sun-Sentinel. "I'm going to pitch as well as I can and hopefully I'll open some eyes this spring. That's about all I can hope for."

Elliott didn't make Atlanta that year, but he did move up, to AAA Richmond. He was also traded again, the Braves using their surplus to pull Fred McGriff from the Padres.

Then came his 1994 campaign. Called up to San Diego in late-April, Elliott stayed through early July. He amassed those 30 total outings, 33 innings of work, posting a 3.27 ERA. His run only ended when he hit the disabled list.

Elliott's 1995 season was also shortened, with just seven relief outings at Las Vegas. But he also got that final outing in San Diego that September. In two innings of work, Elliott gave up just two hits and no runs.

Elliott went on to play in two more seasons, but he never returned to the majors.

Elliott has since gone on to stay in the game, as a coach in high school, for Sam Houston High in Texas and, more recently, as coach for his own old high school, Deer Park High.

After returning to his alma mater in 2012, Elliott told Inside Deer Park he was looking forward to his return to the Deer Park field.

"The last time I wore that jersey, we lost in the first round to Clear Lake and that was 26 years ago," Elliott told Inside Deer Park. "Words cannot describe how excited I am. I think every coach wants to come back and coach their alma mater and not everyone gets that chance."