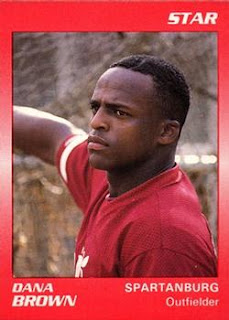 Dana Brown could hardly watch in October 2012 as the Washington Nationals lost in the NLDS.

For Brown, the franchise's scouting director from 2002 to 2009, it was particularly painful, he told The Toronto Sun later, because he was among those who laid the groundwork for that team.

"Those guys you draft, they become like your kids," Brown told QMI, "you want them to do well."

Brown spoke to The Sun having moved on to another job, special assistant to the Blue Jays' general manager. His job for 2012 with the Blue Jays is a continuation of a baseball career that has spanned more than two decades.

That career began in 1989, when the Phillies took him in the 35th round, out of Seton Hall University.

He played his first year at short-season Batavia, hitting .274 in 62 games. He moved to single-A Spartanburg for 1990, then later to high-A Clearwater. Between those teams that year, Brown hit .266.

Brown then moved on to AA Reading for 1991, singling in a game-winning April run and knocking in two runs in a June game. On the year, Brown hit just .244, with two home runs. It was his final year as a player.

Brown then moved to be a minor league instructor, then became a scout with the Pirates, according to MLB.com. He then joined the Expos as scouting director in 2002.

In 2011, Brown spoke to MLB.com about his goal of one day becoming a general manager himself. Should he achieve that goal, Brown, who is black, would be among a select group of minority GMs.

Brown also spoke of the opportunity to work with Blue Jays GM Alex Anthopoulos, one that Brown called a way to get him where he wants to go.

"I have aspirations of being a GM in the future, and I knew this would help a lot in terms of learning more about the administrative duties, the front office and staying closely involved in the baseball part," Brown told MLB.com. "It was a difficult decision to leave [Washington], but I knew it was a something I needed to do."