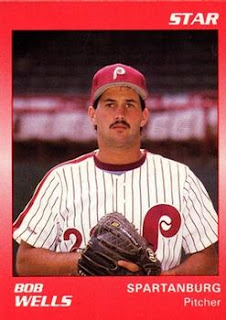 With Randy Johnson down, teammate Bob Wells tried his best impression in this July 1996 contest.

That impression for Wells turned out to be a complete-game shutout, four years removed from Tommy John surgery, according to The Associated Press.

"Wellsy is very important to us," Wells' manager Lou Piniella told The AP afterward. "We want to keep him nice and strong."

Wells threw that shutout in his third season with time in the majors, part of a career that spanned nine big league seasons and saw Wells work mainly out of the bullpen.

Wells' career began in 1988, signed by the Phillies as an undrafted free agent out of Spokane Falls Community College.

He started in 1989, at rookie Martinsville, moving to Spartanburg for 1990. By 1992, he got his first look at AA, at Reading, but he also underwent that Tommy John surgery.

Wells returned for 1993, even getting his first look at AAA. Then, in 1994, Wells debuted in Philadelphia. After getting into six games there, Wells was taken off waivers by the Mariners, getting another appearance with Seattle.

Wells' 1995 campaign turned out to be his first fully in the majors. He got into a total of 30 games for the Mariners, four starts, posting a 5.75 ERA.

In May 1995, Wells was also looked at to step in for Johnson, this time at the last minute. Wells ended up getting into the fourth, giving up a single run, The AP wrote.

"Lou told me to take all the time I needed to get ready," Wells told The AP of Piniella. "It's nice to get a chance to throw."

In 1997, Wells was even talked about as a candidate to be the Mariners closer. He picked up just two saves, though. In 2000, with the Twins, Wells picked up 10 saves.

"We're going to use him," Piniella told The AP of Wells' closer prospects in 1997. "Everybody we've got here is in the mix."

He signed with the Twins as a free agent in 1999, playing his final four major league seasons with them.

In his first two seasons with the Twins, Wells got into 76 appearances in each campaign. In the 1999 campaign, those 76 outings put him first in the American League. Along with those outings also came sub-4 ERAs. His final year came in 2002, with 48 final outings with the Twins.