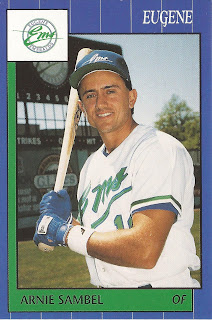 Less than a month into his pro career in July 1990, Arnie Sambel went to team brass to talk, according to The Eugene Register-Guard.

After appearing in eight games and hitting .143, Sambel no longer wanted to play, The Register-Guard wrote.

"His heart just was not in it," Eugene manager Paul Kirsch told The Register-Guard.

Sambel played in those eight games, packed it up and retired.

Sambel's brief career began a month earlier, taken by the Royals in the 28th round of the draft out of the University of San Francisco. Sambel was also credited by his formal name, Arnold Sambel.

Sambel won all-conference honors with San Francisco in 1990, along with team MVP honors that same year. He continued to rank in the top 5 in several offensive categories at the school and won induction into the university Hall of Fame in 2005.

"Hit .340 with 17 homers, 17 doubles and drove in 55 runs during his senior campaign in 1990, at the time the most prolific offensive single-season in program history," the West Coast Conference wrote in 2007 as he made the conference's 40th anniversary team.

Sambel then turned pro with the Royals. He went 0 for 2 in his debut game with a run scored against Southern Oregon. His best game came June 22 when he went 2 for 2 against Bend. His last came July 8 against Boise, where he went 0 for 1 in a pinch-hit appearance to end his brief career.

Sambel's son, also Arnie Sambel, has followed his father into college sports, though in track and field at Cal Poly.

Sambel's brief career and where he played mean the entire record of his pro career is easily available through box scores from The Eugene Register-Guard and Google News. Sambel's career: