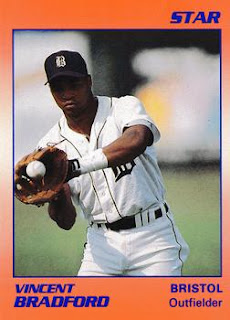 Vince Bradford played his first two professional seasons and looked around. The outfielder saw himself behind his teammates. He also saw himself moving to a different sport, football, according to The Tulsa World.

"I think I was just a little bit behind and I realized that I couldn't catch up," Bradford told The World in September 1996. "I realized it would be better for me to stop playing baseball and come back to football, which I think I was better at."

Bradford returned to football and to college, going to the University of Arkansas to play linebacker. Bradford went on to play football in Europe. He never saw the majors - or the NFL.

Bradford's career began in 1990, taken by the Tigers in the third round of the draft out of Malvern High School in Arkansas. Bradford was also credited by his formal name, Vincent Bradford.

Coming out of Malvern, Bradford gained enough attention to be thought of as a first-round pick. His football interest - and a letter of intent he signed to go to Arkansas - led him to drop to the third round.

Bradford's baseball prowess also gained him notice from a baseball card manufacturer. Bradford made the 1990 Little Sun High School Prospects set. The card noted his football achievements, making All-State all four years in the sport. He also excelled in track and basketball.

Bradford signed with the Tigers and started at rookie Bristol. In 52 games, he hit just .100, knocking in a single run. He returned for 1991 but did little better. He hit .128, ending his brief baseball career.

Bradford soon found himself at Arkansas playing weekside linebacker. After his elegibility maxed out, Bradford got invited to NFL camp, but he didn't make a roster.