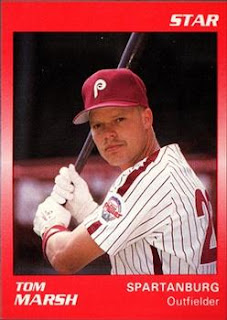 For Tom Marsh, this day couldn't have come at a better time.

He'd started the day, in his rookie season, with a sub-.200 average. Three hits - one of them his first career major league grand slam - and that average jumped as much as his confidence.

"I was just on the radio, and they played a replay of the slam for me," Marsh told The Philadelphia Inquirer after that September 1992 contest. "I got goose bumps. I'd been trying to keep my confidence up, but it's hard when you're struggling."

Marsh debuted with the Phillies that year in his fifth professional season. He went on to see time in two more, last playing in the major leagues in 1995.

Marsh's career began in 1988, taken by the Phillies in the 16th round of the draft, out of the University of Toledo.

Marsh started at short-season Batavia, hitting single-A Spartanburg in 1989, then AA Reading in 1990. He first made AAA Scranton in 1992, then, that June, debuted in Philadelphia.

"Simply unbelievable," Marsh told The Philadelphia Daily News that June of his debut with the big league Phillies. "I can't even describe the feeling. It's just a lot of intensity, a lot of emotion."

Marsh ended up getting into 42 games for the Phillies that year, his batting average settling in at exactly .200. He hit two home runs and knocked in 16.

For 1993, Marsh returned to the minors, spending the year back at Scranton. For 1994, though, Marsh was back in the majors, getting eight games. The next year, he returned to his 1992 form, getting a final 43 games in Philadelphia.

In that 1995 season, Marsh hit .294, with three home runs and 15 RBIs. He then finished out his career with two more seasons in the minors.

In one June 1995 game, though, Marsh hit two of his three home runs on the year in the same game. After he hit the home runs, he told The Associated Press he hit them for the team he wanted to hit them for.

"It was discouraging at times," Marsh told The AP of his time back and forth from the minors. But I love this team. I started with the Phillies and I want to play with the Phillies. I know there are other teams out there. But I don't want to leave. I love it here."