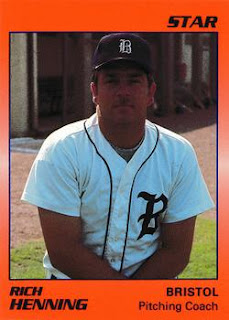 "We didn't throw strikes at times, and didn't play catch," Henning told The Woodland Daily Democrat afterward. "We've been throwing the ball around too much, we've been beating ourselves sometimes."

Henning has served as head coach at Christian Brothers in Sacramento after his own brief playing and coaching career in the pros. Henning played three seasons, coached at least one and also scouted.

Henning's pro career began in 1983, signed by the Giants out of his native Sacramento.

Henning started with the Giants at Rookie Great Falls. A pitcher, he wnet 5-3, with a 2.63 ERA.

In 1985, Henning got into 15 games, starting 13. One of those starts turned into a no-hitter. Henning combining with another hurler in an April game to do it against Bakersfield. He went 6-6 overall, with a 4.46 ERA, ending his brief career.

Henning then turned scout. He worked for the Giants for two years and the Tigers for three, according to his ProCards card. He then coached 1990 at rookie Bristol.

Henning soon returned home to Sacramento. He founded the Sacramento Sports Center. He also coached at Sacramento City College.  In 2016, he continued as head coach at Christian Brothers in Sacramento.