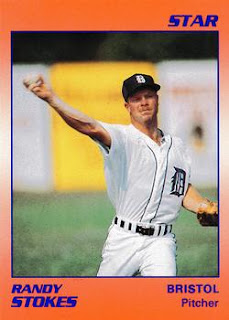 Randy Stokes hit a milestone for Lugoff-Elgin High School in 2016. That's when the longtime head coach notched his 300th win for the school over nearly 20 years.

"I feel like I'm very lucky to be in one place such a long time," Stokes told The Camden Chronicle-Independent. "The people have been real good to me while I've been here. I've been lucky to have had really good coaches in the years that I've been here and, I've had some really good players. You put all that together, stay in it long enough and, you'll eventually get to 300 wins."

Stokes got to those 300 wins as a coach after a brief career in the pros as a player. Stokes pitched two seasons in the Tigers organization. He never made AA.

Stokes' career began in 1990, signed by the Tigers as an undrafted free agent out of Costal Carolina University.

Stokes played his first season with the Tigers between rookie Bristol and single-A Fayetteville. He picked up one win in 22 relief outings. He also ended with a 1.98 ERA.

Stokes then went on to a career as a coach and as a teacher. He teaches physical education at Lugoff-Elgin Middle School and serves as athletic director at the high school.

In April 2017, Stokes told The Chronicle-Independent of his advice to his fielders late in a game.