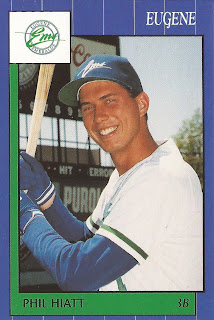 As the drug debate in sports raged even in August 2000, AAA infielder Phil Hiatt told The Denver Post that, while he hadn't done steroids, he could see why others at the top of the minors had.

"As a minor leaguer, you can't fault the guy," Hiatt told The Post then. "(Teams) are the ones putting the emphasis on numbers and not calling up guys who are putting up numbers. So you've got to put up about 40 to 50 home runs to get a call-up."

By that point, Hiatt had seen the majors in three different seasons. He saw the most major league time seven years earlier, in 1993, the also saw extended time in 1995, both with the Royals.

He went on to play in 30 more games in 2001 with the Dodgers. He also, according to allegations in the Mitchell Report, went on to meet Kirk Radomski and purchase from him human growth hormone and Deca-Durabolin.

Hiatt's career began in 1990, taken by the Royals in the eighth round of the draft out of Louisiana Tech University.

Hiatt started with the Royals at short-season Eugene. He expressed focus to The Eugene Register-Guard that July.

"I'm here to do one thing," Hiatt told The Register-Guard, "and that is to play baseball. I'm not going to let anything I do hurt that."

"It’s been quite a week," Hiatt told The Independence Examiner after his first few games. "It's been a real whirlwind. It’s all happened so fast — but I’m enjoying every minute of it.”

"I'm just happy to be here," Hiatt told The Los Angeles Times upon his return in April 2001. "It's been a while. I'm not going to ask any questions."

Hiatt saw 30 games for the Dodgers that year and hit .240. But it was also during that year that Radomski told George Mitchell that Radomski first spoke with Hiatt and sold Hiatt HGH.

"Radomski also spoke on the phone with Hiatt on an number of occasions," the Hiatt section of the Mitchell Report reads. "Hiatt called Radomski from time to time with questions about the use of performance enhancing substances."

Hiatt did not respond when Mitchell gave him an opportunity to address the allegations, the report reads.