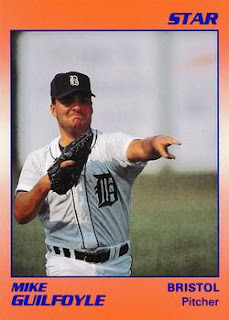 Mike Guilfoyle pitched into his 14th professional season in 2003. He saw half that time in the minors and the other half in independent ball and a brief stint in Korea.

As he continued his career in May 2003 with the independent Bridgeport Bluefish, Guilfoyle explained to The Hudson Reporter why he continued.

"Because baseball is in me," Guilfoyle told The Reporter. "I'm never going to get rid of that feeling."

Guilfoyle ended his long career that year. He made it as high as AAA, but he never saw the majors. He's since started a new career, in law enforcement.

Guilfoyle's baseball career began in 1990, taken by the Tigers in the 19th round of the draft out of St. Peter's College in New Jersey.

Guilfoyle started with the Tigers at rookie Bristol. The hurler went 4-6 over 16 games, seven starts. He moved to single-A Fayetteville for 1991, then high-A Lakeland for 1992.

Guilfoyle made AA London in 1993, then stayed in AA the next two seasons. He picked up a spring 1994 loss, walking four straight in the 10th inning.

Guilfoyle moved up to AAA Toledo in 1996. He went 5-5 over 54 relief outings, with a 5.14 ERA. That season marked the end of his affiliated career.

Guilfoyle then moved to independent ball. He played 1997 at independent Chico in the Western League. He arrived in Bridgeport for 1998 and eventually play there over five seasons.

Guilfoyle has since stayed in the Bridgeport area, taking up his new career as a police officer. In 2014, he spoke to MyCentralJersey as a member of the Fairfield, Conn., department, just west of Bridgeport.

"It's nice to have traded in one uniform for another, because the team aspect is still here," Guilfoyle told MyCentralJersey that August. "Guys depend on me, and I depend on them. Crime never takes a day off, as they say."