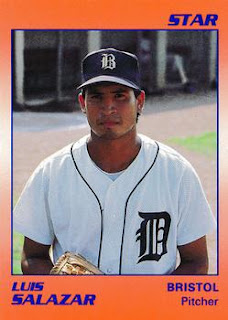 Luis Salazar had a brief career - or a longer one, depending on the source.

What's certain is that his 1990 season ended up being a brief one. The right-hander got into just seven games for the Tigers at rookie Bristol. He didn't play for the Tigers the year after or the year before.

Otherwise, Baseball-Reference and The Baseball Cube tack on seasons either two years before 1990, five and six years after 1990 and even independent ball time.

However, this Luis Salazar's career appears to have been limited to that single season in 1990 and those seven outings.

The Bristol Salazar's career began in 1990, signed by the Tigers as a free agent out of his native Venezuela, according to his ProCards card. He attended Miguel Penia High School in Maracay.

With Bristol, Salazar got into those seven games, 9.1 innings. He gave up two earned runs for a 1.93 ERA. But, even with that ERA, he didn't return again.

Baseball Reference identifies time in 1988 and 1995, however, those seasons appear to have been different Salazars.

Then the credited 1995 time at high-A Stockton appears to also be a different Luis Salazar. Baseball Reference has another Luis Salazar playing there in 1996, one born in 1974, suggesting the 1995 and 1996 Salazars are the same.