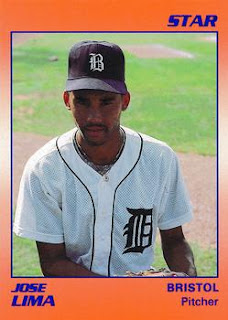 The Associated Press noted Jose Lima's "on-mound exuberance" in reporting his return to the Astros with a new contract in 2000. Astros general manager Gerry Hunsicker noted that exuberance played a part in Lima's success.

"I think what makes Jose unique is not his skill as a pitcher but his willingness to express himself when he's not only out on the mound, but whenever he's in public," Hunsicker told The AP. "He's not afraid of what people think. I really believe that has played a part in his success."

Lima played seven more major league seasons, never matching his success those two years. But he did have one big playoff moment with the Dodgers in 2004. He continued playing in the bigs until 2006 and then in independent ball through 2009. In May 2010, Lima passed away at the age of 37.

Lima's career began in 1989, signed by the Tigers as a free agent out of his native Dominican Republic, where he attended Laschargas High School.

Lima got into three games for the Tigers in 1994, giving up 10 earned in 6.2 innings of work. That May, longtime Tiger Lou Whitaker praised the youngster upon his first call up.

"I can't remember the last time a kid came along with that kind of confidence," Whitaker told The AP. "He handles himself like he has been around for years. And I think he probably will be around here for a lot of years."

Lima took the starting rotation job in 1998 after injuries. After early success, he worked with his pitching coach to add a sinker and slider, according to The Houston Chronicle.

"Everybody says we made the decision (to put him in the starting rotation)," Astros manager Larry Dierker told The Chronicle. "That decision made itself."

His last big season came in 2004 with the Dodgers, going 13-5, with a 4.07 ERA. He helped he Dodgers to the playoffs, and avoid elimination against the Cardinals for a night with a complete-game, five hitter.

The AP described his reaction to the win as including pumping his fist, shouting and pointing at teammates. Before the game, he drew the initials of family members on the mound.

"He's always been like that," the Cardinals Reggie Sanders told The AP afterward. "One thing, on our part, you can't get too hyped up or too caught up on that. Lima has always been Lima. He tries to get you caught up in his world. He did tonight."

After spending time in Mexico, Korea, his native Dominican Republic and independent ball, Lima threw his final professional pitch in 2009. Then, in May 2010, he passed away at the age of 37.

"He had a great flair and such enthusiasm for life," Tal Smith, Astros president of baseball operations told The AP after Lima's passing. "'Lima Time' was a special time. 'Lima Time' was whenever he was pitching, or at any event or club function or civic function that he was at. He'd get up and sing and dance, and he was very, very good. He was a real entertainer."