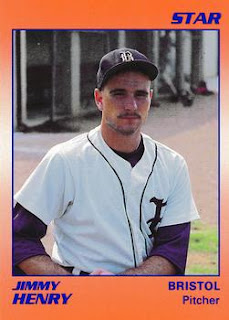 The Detroit Free Press outlined Jimmy Henry's resume upon his promotion to AA in June 1992.

But, while he would return to London the next year, turning reliever, Henry  never made it higher. He never made the majors.

Henry's career began in 1990, having been taken by the Tigers in the 45th round of the previous year's draft out of Sacramento City College. He played his high school ball at Placer High in California.

Henry then moved to short-season Niagara Falls and Lakeland for 1991. His Lakeland time comprised six relief outings and four earned runs over 11 innings of work.

Henry played his time at Lakeland and London in 1992, ending with an 11-8 overall record between them and a 3.14 overall ERA.

For 1993, Henry again split time between London and Lakeland. He played much of his time at London, getting into 33 games in relief. He turned in a 5.28 ERA, marking the end of his career.