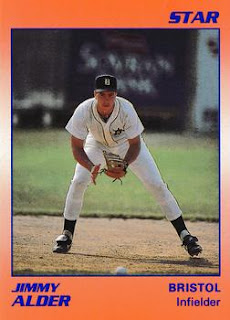 Jimmy Alder showed his single-A manager what he could do in this spring 1991 contest, according to The Fayetteville Observer.

After hitting 12 home runs the previous year, Alder knocked a solo shot in this game, The Observer wrote.

"The ball Alder hit was against the wind and carried about 400 feet," Fayetteville manager Gerry Groninger told The Observer. "He just crushed it. That was a bright spot for me because when he came in to spring training he was not swinging the bat well. The last two games he's really started to hit. I'm pleased with what he's doing."

Alder played part of that season with Groninger's Generals and the other part back at rookie Bristol. He played two more seasons after that, but he couldn't crush the ball enough to make it higher than AA.

Alder's career began in 1990, taken by the Tigers in the fourth round of the draft out of Dobyns-Bennett High School in Tennessee.

In high school, Alder drove in nine runs in a playoff game. He also took the mound and threw a shutout in another tournament game, according to The Bristol Herald-Courier.

"Jimmy was as good as I've ever seen," Stacy Carter, who had to face Alder in high school, told The Herald-Courier. "I've seen him hit some monster shots. He was a great hitter and could pitch equally as well too."

Alder moved to single-A Fayetteville and returned to Bristol for 1991, hitting .203 on the year. That May, he got some help with some eyeglasses, lowering his strikeout rate after getting fitted with them, according to The Detroit Free Press.

Alder played 1992 at high-A Lakeland, improving his average to .250. He hit eight home runs. He then played 1993 at Lakeland and at AA London.

At London, Alder got into 42 games, but hit just .193. He helped London take a lead in a May game with a late double. He then went 2 for 3 with Lakeland in an August game, knocking in three. That season, however, marked the end of his career.

Alder soon returned home to Tennessee. In 2007, he watched one of his high school marks go by the wayside. Alder hit 31 home runs in his high school career. That year, another player, Derek Trent, eclipsed him and Alder got to watch, according to TriCitiesSports.com.

He also gave some advice to the prospective pro Trent.

"You're going to miss your family," Alder told TriCitiesSports. "I know I did. But if you can get the money, you need to take it. Most teams now provide for schooling if something happens that you get hurt."