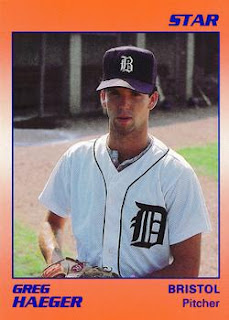 Greg Haeger made the big transition from college to the pros in 1990. He also made another transition - from the field to the mound, according to The Fayetteville Observer.

Haeger pitched little in college, but a wrist injury helped prompt the move to pitching, The Observer wrote. He continued the transition in 1991 at single-A Fayetteville.

"Everybody here is learning," Haeger told The Observer that May. "That's the point of being here. I have a little catching up to do I guess. I'm doing the best I can at it."

Haeger went on to play in just two more seasons. He never made AA. He has since gone on to a career as a coach in college, coaching for nearly two decades in 2016 for Madonna University in his hometown of Livonia, Mich.

Haeger's career began that year in 1990, taken by the Tigers in the 21st round of the draft out of the University of Michigan. He went to Michigan out of Livonia High School.

He then played 1992 between Fayetteville and high-A Lakeland. He picked up a loss in an August game for Lakeland, giving up three earned in five innings. Overall, he went 5-4, posting a 4.62 ERA, ending his Tigers career.

Haeger returned to the field in 1994 with independent Huron. He played both as a pitcher and in the field, ending his brief career.

Haeger soon became an assistant coach at Madonna, then head coach. He's since won 500 games with the school, earning that mark in 2012. He led his team to six conference championships in seven years. He continued as the school's coach in 2016, marking his 19th season as head coach.