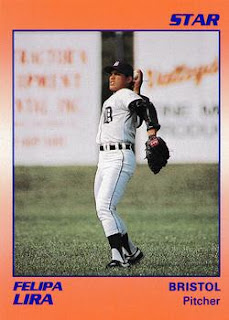 Felipe Lira helped pitch his Tigers to a victory in this May 1996 game, going seven and giving up two earned.

In a stretch where Tigers wins came at a premium, Lira pointed to his teammates.

"This is a team game," Lira told reporters afterward. "This is how we have to play all the time. I got the win, but we all won the game."

Lira got that win in his second major league season. He went on to play in a total of seven big league campaigns, moving from starter to reliever. In all, he appeared in 163 contests in the majors, posting a career record of 26-46.

Lira's career began in 1990, signed by the Tigers as a free agent out of his native Venezuela.

Lira started with the Tigers at rookie Bristol and high-A Lakeland. He made AA London and AAA Toledo three years later in 1993. He then made Detroit in 1995.

He returned for another 32 starts in 1996, going 6-14 overall. He went 8.2 innings in a July game, giving up a single run, but coming away with a no-decision. That September, he gave up Eddie Murray's 500th career home run.

"It was a horrible pitch," Lira told The Baltimore Sun after the Murray home run cost him a win. "It was a split-finger that did nothing. I made a big mistake, and he did not miss it. If I throw that pitch 100 times, 99 of them are going out. He got me."

That May, Lira broke a personal nine-game losing streak, then one two straight. He struck out 10 in that second win.

"I'm proud to win and pitch a good game; I know I can pitch," Lira told The Associated Press afterward. "I had good location and threw strikes. Each inning I just concentrated and on getting the first guy out, and it worked."

Lira saw limited time with the Mariners in 1998 and Tigers in 1999. His last year with extended time came in 2000 with the Expos. He got into 53 games, starting seven. He turned in a 5.40 ERA. His big league career then ended in 2001 after four final appearances.

Lira then continued on in the minors, Mexico and Venezuela. His final credited time came in 2008 with independent Yuma.

Lira has since spent some time with the White Sox as a coach in the Arizona League.