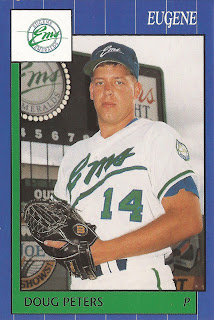 Doug Peters went deep in this July 1990 game at short-season Eugene and he came away with the win, according to The Eugene Register-Guard.

Peters gave up six hits and one earned run in the 3-1 victory, The Register-Guard wrote.

"I felt like I had good control out there," Peters told The Register-Guard afterward. "I was getting a lot of ground balls and the infield played great behind me."

Peters worked to continue that control over the following seasons. His career, though, ended after four. A shoulder injury ended his career short of AAA.

Peters' career began that year in 1990, taken by the Royals in the 20th round of the draft out of Indiana University.

He took a step back for a shortened 1992. He played at high-A Baseball City and saw just four starts. He then returned in 1993, where he played between Memphis and single-A Rockford. He went 3-4 over 17 outings, 13 starts and ended the season with a 4.02 ERA.

He then had surgery on his shoulder for a rotator-cuff injury. He chronicled his attempt to come back for his hometown New Castle News.

"Right now my arm's doing great," Peters told The News in mid-March 1994. "I have great velocity on my ball again and I’m feeling good about all my stuff. Coming into spring training, I thought I had a starting position. Right now it seems like things have changed."