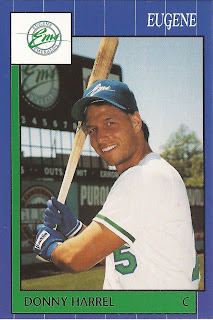 Donny Harrel turned pro out of Taft College in 1990 and he didn't look back, he told The Eugene Register-Guard that June.

Harrel's time waking up and going to the ballpark as a player ended up being limited. He played that year and the next. But he has gone on to return to the ballpark many times since, in the role of coach.

Harrel's career began that year in 1990, taken by the Royals in the 18th round of the draft out of Taft.

Harrel started with the Royals at short-season Eugene. In 55 games, the first baseman/catcher hit .223, with four home runs.

Harrel then turned coach. He coached at Lane Community College in Eugene, coaching them to the championship in 1999. He then became an assistant coach at Oregon State and the University of Washington.

In 2008, he moved to Seattle University to take over its reborn baseball program. He continues there in 2018.

"Donny and his staff have done a remarkable job in a very short period of time," school director of athletics Bill Hogan said in a release after Harrel signed a new contract. "Baseball is very important to the Seattle U community and we have established a solid foundation to compete for championships in the near future."