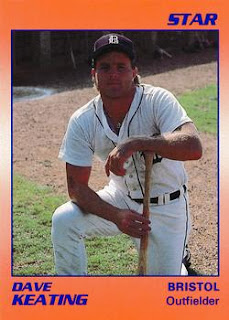 Dave Keating thought about continuing his two-sport playing, but they he decided on one sport, baseball, The Los Angeles Times wrote.

"I went back and forth," Keating told The Times in 1989. "Then, (the Tigers) came back and gave me a little more money and guaranteed (they would send me to) instructional league. They showed they were going to take the time to work with me. That was the deciding factor."

Keating played both baseball and football at UCLA and then went pro in baseball. He played six seasons in pro baseball, both as an outfielder and as a pitcher. He never made AAA.

Keating's career began that year in 1989, taken by the Tigers in the fifth round of the draft out of UCLA. Keating is also credited as David Keating.

At UCLA, the Salinas-native started his college career on a football scholarship. After being drafted in baseball out of high school and choosing college, didn't hit the baseball field again until 1988.

He played wide receiver on the football field and caught a Troy Aikman touchdown pass in September 1988. He blocked a punt in the 1987 Aloha Bowl.

On the baseball field, he picked up five triples in 1989, after resuming his baseball career a year earlier, in 1988. Keating's baseball coach at UCLA head coach Mike Gillespie recalled being pleasantly surprised when he first saw Keating.

"When I saw Keating play the first time, I said, 'Where did that guy come from--who is that guy'?" Gillespie told The Times.

Keating started with the Tigers at short-season Niagara Falls. He hit .290 in 55 games. He then played 1990 between single-A Fayetteville and rookie Bristol. He only saw 32 games.

After playing 70 games back at Fayetteville in 1991 and hitting .264, Keating tried his hand at pitching. He also moved to the White Sox system.