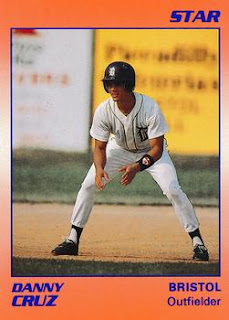 Daniel Cruz played two positions for the Bristol Tigers in 1990.

He played outfield in 58 games for the rookie ball club. He played the other position in seven games. His second position? Pitcher.

Cruz pitched 10.2 innings to round out his rookie ball campaign, his first as a pro. He isn't recorded as pitching again as a pro - or playing outfield. Cruz' career started and ended that year. He didn't get into a second season.

Cruz joined the Tigers system the previous year, taken by the Tigers in the 24th round of the 1989 draft out of his native Bayamon, P.R. The Tigers selected him out of PapaJuan XXIII High School. He was also credited as Danny Cruz.

Assigned to rookie Bristol, Cruz played his games in the field in the outfield. He got into 62 games with an at bat. He hit .241, with 16 RBI and six stolen bases. He hit no home runs.

On the mound, Cruz got into those seven games. In his 10.2 innings of work, he struck out six and gave up 11 earned runs for an ERA of 9.28. That season at Bristol ended up being his only season as a pro.