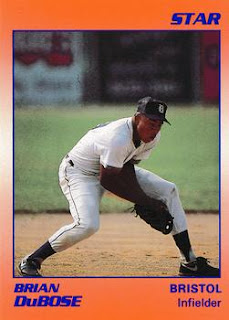 The direct path from Brian DuBose from his house to Tiger Stadium took about eight minutes by car, he told The Fayetteville Observer.

The path to play there, though, DuBose knew took a lot longer.

"It would be a privilege to play for my hometown," DuBose told The Observer as he started his third professional season. "But I have no control on how quickly I get there. I just want to keep progressing and maybe in a year or so I'll get my chance. Right now I'm looking forward to a successful season in Fayetteville."

DuBose continued playing in the Tigers system into 1998, but he never progressed enough to make the majors, making it to AA but no higher. Along the way, a spring training injury interrupted his career, keeping him away for two full seasons.

DuBose's career began that year in 1990, taken by the Tigers in the 53rd round of the previous year's draft out of St. Mary's of Redford High School in Detroit.

DuBose started with the Tigers at rookie Bristol. He got into 67 games, hitting .251. He then moved to single-A Fayetteville and short-season Niagara Falls for 1991.

After playing all of 1992 at Fayetteville and hitting .228, DuBose moved to Lakeland full time for 1993 and improved his average to .313. He hit a home run in an August game, one of eight he hit on the year. He hit another one days later, knocking in three runs.

That off-season, DuBose played in the Arizona Fall League and made the Tigers off-season 40-man roster. His performance and outlook drew praise in January from Toledo MudHen manager Joe Sparks.

In spring training 1995, DuBose went for a catch, slid and hit the outfield wall. He fractured a vertebrae in his back. He ultimately returned to the field, but didn't make it back for two full years. He returned in 1997 to single-A West Michigan, then to Lakeland and AA Jacksonville for 1998.

''I think you've got to give him a lot of credit for sitting out that extended period of time and then working his way back up to this level right now," Jacksonville manager Dave Anderson told The Florida Times-Union of DuBose's layoff.

He played 1999 at AA with the Dodgers and the Mets, then 2000 with independent Catskill. His final pro time came in 2002 at independent Camden. DuBose has since settled in Tampa Bay, founding the Tampa Bay Warriors youth teams.