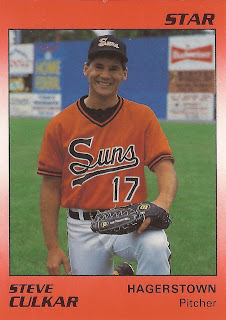 Maybe it was the injury he suffered the previous season. Maybe it was the worker's compensation claim that followed. Or maybe, in his fifth season, Steve Culkar's time was just up.

Whatever the reason, according to The Chicago Tribune in August 1991, Culkar had just been given his release by the Orioles.

With that release, though, Culkar did have other options, The Tribune noted. In his back pocket, Culkar already had a TV communications degree.

Culkar's professional baseball career began in 1987, taken by the Orioles in the 14th round, out of the University of Kentucky.

At Kentucky, Culkar was called the team's top reliever in 1987, helping the team to the SEC tournament, its first in six years. By tournament time, Culkar had three saves and an ERA of 2.30. An apparent video of an April 1987 Culkar appearance is on YouTube.

With the Orioles, Culkar played his first season between rookie Bluefield and short-season Newark. In 11 outings, Culkar posted a 2.57 ERA.

For 1988, Culkar played at single-A Hagerstown and single-A Virginia. Culkar also saved eight games for Hagerstown, picking up his seventh in a July game. He also got his first look at AA Charlotte, getting 15 games and a 3.00 ERA there.

Culkar then split 1989 between AA Hagerstown and at the next level higher, AAA Rochester. He got 26 games at Hagerstown, getting a 1.34 ERA there. At Rochester, he got into 23 games, posting a 3.99 ERA.

It was in 1990 that Culkar had his abbreviated season. Sent back to Hagerstown, Culkar's season consisted of just two outings, giving up four earned runs in 5.2 innings of work.

Culkar came back for nine total outings in 1991, at high-A Frederick and at Hagerstown, but they were the last outings of his career.

Culkar has since gone on to use that communications degree. According to his LinkedIn profile, Culkar is currently a senior account executive at Fox Sports Net.