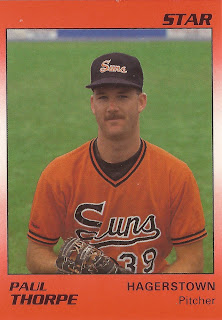 Daytona Beach manager Jim Hutto had a reliever he used in high-pressure situations in June 1985 and that was Paul Thorpe.

It was just on this night, Hutto told The Daytona Beach Morning Journal, he thought he should spread around the pressure.

"I stayed with (Larry) Heise because I've put Paul Thorpe into too many do or die situations already this year and I thought it was somebody else's turn," Hutto told The Morning Journal.

By the time Thorpe's time with Daytona Beach was done that year, he'd gotten into 24 games in relief, picking up four saves, with an ERA of 2.51.

Thorpe was in his second professional season that year. He went on to play in seven seasons. He never got to play in the majors.

Thorpe's professional career began in 1984, signed by the Orioles as an undrafted free agent out of his native Scarborough, Ont.

With the Orioles, Thorpe started at rookie Bluefield. In 25 outings, Thorpe put up a 2.67 ERA, picking up seven saves.

Thorpe returned to AA in 1989, headed back to Hagerstown. He also got his first look at AAA Rochester. At Rochester, Thorpe got into 14 games, with a 2.66 ERA. That would be Thorpe's only time at AAA.

Thorpe played just one more season, back at AA Hagerstown. He ended up saving 12 games, picking up his 11th at the end of July, a two-inning outing. But Thorpe's career ended with season's end, short of the majors.

Thorpe's time at AA Hagerstown, though, did earn him a mention by the Hagerstown Suns Fan Club, as a member of the 1989-1992 All-Affiliate Team's bullpen.