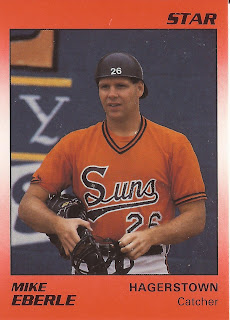 Mike Eberle took his swing, knocking the ball over the wall. Eberle was playing that summer in 1985 with the collegiate-league Nevada, Mo., Griffons. This home run, according to The Nevada Daily Mail, turned out to be the game-winner.

It was also a home run that drew praise from Eberle's new manager Dave Jorn, according to The Daily Mail.

"I liked his swing on that stroke. He hit the ball good," Jorn told The Daily Mail of Eberle. "He didn't try to overswing."

Eberle took that swing on to Indiana State, helping the team to the 1986 College World Series. He also took it to the pros, playing five seasons with the Orioles organization. Eberle, though, never could take that swing to the majors.

Eberle's pro career began in 1987, taken by the Orioles in the 8th round, out of Indiana State.

With Indiana State in 1986, Eberle helped the team make that trip to the College World Series. He singled and scored in Indiana State's debut, which ended up in a loss. In the school's second game, the catcher Eberle threw out a runner.

During one summer in college, Eberle played collegiate ball with the Griffons. In summer 1985, Eberle had a total of 13 home runs by early August, taking his team to the Missouri National Baseball Congress Tournament. In all, he hit 16 home runs that year.

With the Orioles, Eberle started at short-season Newark, hitting .325 in 24 games. He also hit one home run.

Moving to single-A Hagerstown for 1988, Eberle's average dropped to .244 over 123 games. His five home runs on the year ended up being the most he'd hit in one campaign.

Eberle has gone on to see his son play ball, son Michael Eberle following the father to Indiana State, playing there for 2013.

In 2010, young young Michael Eberle played for the local Terre Haute American Legion team, just like his father did a quarter century earlier, according to The Terre Haute Tribune-Star.

The son did so by hitting home runs. In comparison to his father, Michael Eberle told The Tribune-Star he wasn't sure who had more.

"He probably has more homers, because he's a pretty big guy," the younger Eberle told The Tribune-Star of his father. "Hopefully I'll get bigger and stronger too."