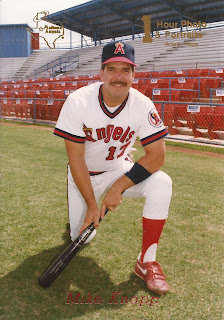 Mike Knapp played more than a decade in the pros. He made AAA in seven of those seasons.

After what turned out to be his final season in 1996, Knapp knew the end had come, he told The Daily Californian years later.

"There's definitely still some frustration that I didn't get that one final call," Knapp told The Daily Californian. "But it was time to move on."

Knapp told The Daily Californian about his own career on the occasion of his son Andrew Knapp about to start his own. And, while the father never took that final step to the bigs, his son took that step in 2017 with the Phillies.

Mike Knapp's career began in 1986, taken by the Angels in the 15th round of the draft out of the University of California, Berkeley.

At Edmonton, though, Knapp received word he might get called up to California due to an injury, he told The Philadelphia Inquirer. A teammate broke the news that someone else got called up instead of Knapp.

"I was still kind of waiting for the phone call," Knapp told The Inquirer in 2017. "That was a moment. That was probably the lowest moment of my career: OK, now what?"

Knapp split time again between Midland and Edmonton in 1990. He hit two home runs in 57 games for Midland that summer, one a grand slam San Antonio in June.

Knapp moved to the Cubs and AA Charlotte for 1991, then played 1992 at AAA Iowa. He hit a two-run home run in a September loss against Oklahoma City.

Knapp then played 1993 and 1994 with the Royals at AAA Omaha, split time between the Orioles and Reds systems for 1995. He played his final season in 1996, 59 games with the Mariners at AAA Tacoma to end his career.

Knapp's son Andrew, born in 1991, followed his father to Berkeley and then to the pros as a second-round selection for the Phillies in 2013. He debuted in Philadelphia in April 2017 and the father shared his thoughts with CSN on the milestone.

"It's funny to watch him, I've watched him hit for so long," Knapp told CSN in an on-air interview. "You can tell if he's in or out, right, and if he's taking the pitches he should and swinging at the ones he should, so I actually thought he looked pretty good."