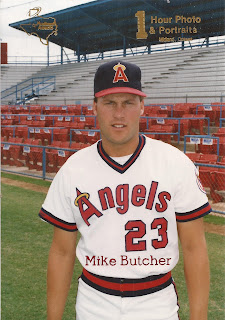 Mike Butcher wasn't afraid to hit a batter in his major league career, something he learned from his father, according to The Los Angeles Times.

Butcher's father recounted those early days to The Times in spring 1994 - and the imposing pitcher his son had become.

"I'd be a liar if I thought he'd ever make it as a major league pitcher," Bob Butcher told The Times of his son, "but there was never a doubt in my mind that he would be one tough SOB."

That tough SOB saw time in four major league seasons, all with the Angels. He's since gone on to teach everything he learned to other pitchers as a major league pitching coach.

Butcher's career began in 1986, taken by the Royals in the second round of the 1986 June secondary draft out of Northeast Oklahoma A&M College.

Butcher started with the Royals at short-season Eugene. He then made single-A Fort Myers and Appleton in 1987. He moved to the Angels in mid-1988 and made AA Midland in 1989, staying there for three seasons.

Butcher first saw AAA Edmonton in 1992, then debuted with California that July. Butcher got into 19 games in relief for the Angels that year, picking up two wins and a 3.25 ERA.

That August, Butcher spoke to The Times about his intimidating pitching style, and that he hated the title "headhunter."

"I love standing on the mound, looking into a hitter's eyes, and seeing that he's uncomfortable," Butcher told The Times. "You're giving him that crazed look. You've got a scared batter. And it's your game to win or lose."

Butcher started his coaching career by 1999, when he served as pitching coach at rookie Butte. He moved to AA Arkansas in 2001 and then returned to the majors in 2006 with the Devil Rays.

He moved to the Angels for 2007 and then arrived with the Diamondbacks as pitching coach for 2016. He continues there for 2017.

Upon joining the Diamondbacks, Butcher spoke to AZCentral about working with pitchers at Chase Field.

"The challenges," Butcher told AZCentral, "are just going out and executing pitches, controlling counts, being able to pitch inside, doing the things we can control on the mound and letting our defense do the work for us."
Posted by Steve78 at 7:00 PM