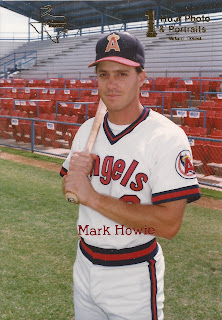 Mark Howie played a different job to start 1992. In his ninth pro season, the infielder no longer played regularly, The Nashville Tennessean wrote.

But, that May, he got his chance to do so again after an injury. He preferred the regular role, he told The Tennessean.

"When I came here, my role changed and it was and adjustment getting into the lineup on something other than a regular basis," Howie told The Tennessean. "When that happens, you try to make something happen immediately instead of pacing yourself."

Howie's career began in 1984, taken by the Athletics in the third round of the draft out of Louisiana State University.

Howie played again at Madison in 1986. He hit .309 that year and won MVP honors in the league all-star game.

He made AA Huntsville and AAA Tacoma for 1987. He played 1988 with the Indians at AA Williamsport and signed iwth the Angels for 1989 and played at AA Midland.

Howie hit .331 at Midland in 1989. He went on to play three seasons at Midland, including hitting .364 there in 1991, with 123 RBI. He hit a three-run home run in the AA All-Star Game, and won game MVP. His time at Midland later earned him a spot in the Texas League Hall of Fame.

Howie signed with the Reds for 1992 and gained some notice that spring from manager Lou Piniella. The notice, however, withered with his age, 29.

"I thought he was a young Barry Larkin until I found out he was older than Barry Larkin," Piniella told The Associated Press of Howie.

Howie spent that season at Nashville. He hit .246 in 105 games to end his career.