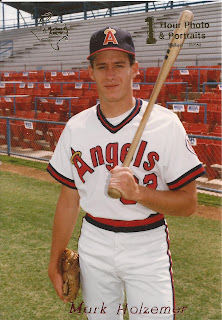 Mark Holzemer went six innings in his major league debut in August 1993, but the outing didn't go exactly as hoped, according to The Los Angeles Times.

Holzemer gave up five runs on nine hits in the no-decision. The young pitcher explained to The Times his thinking during his big debut.

Holzemer went on to see time in six major league campaigns for four different clubs. He got into 94 games, serving mostly as a reliever.

Holezmer's career began in 1987, taken by the Angels in the fourth round of the draft out of Seminole State College in Oklahoma.

The Angels used Holzemer in five games in 1993. He debuted in August, but he had a good shot at making the club that spring. He just missed the cut, according to The San Bernardino County Sun.

"If you'd come up to me on the first day of spring training and said I'd be in Anaheim in April with a 50-50 chance of making the Opening Day roster, I'd have said you were crazy. No way," Holzemer told The Sun.

Following a particularly bad outing in May 1996 where he gave up four runs, Holzeman indicated to The Times he knew the precariousness of his situation.

"I'm not helping my cause," Holzemer told The Times. "The way I'm pitching now, it's tough for Lach to even throw me out there. Finley told me it's my mental approach, that I can't worry about going down [to the minor leagues], because if you pitch like it's going to be your last game, it will be."

Holzeman has since returned to Colorado where he owns and instructs at Slammers Baseball, a club baseball academy. He also serves as an associate scout with the Royals.