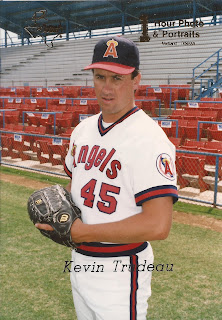 A record crowd came out to watch the Orlando Twins in this June 1986 game and new Orlando reliever Kevin Trudeau didn't disappoint, according to The Orlando Sentinel.

Coming in after the starter faltered, Trudeau went 5 1/3 innings, giving up just two hits in the Orlando win, The Sentinel wrote.

"A great game for the fans," Trudeau told The Sentinel afterward. "This was one we wanted to win for them. When there's that many people out there, the adrenaline flows and you just feel like you play harder."

Trudeau arrived at Orlando and saw that crowd in his third season as a pro. He went on to see crowds at AAA. In seven seasons, he never saw crowds in the majors.

Trudeau's career began in 1984, taken by the Yankees in the sixth round of the January draft out of Chabot College.

Trudeau started with the Yankees in the rookie Gulf Coast League. He went 2-1, with a 1.96 ERA in 10 outings, eight starts.

Trudeau arrived with the Indians to start 1986. He played at single-A Waterloo and AA Waterbury before arriving with the Twins and AA Orlando mid-year. He played 1987 and 1988 between Orlando and AAA Portland.

For 1989, the Twins sent Trudeau along with Bert Blyleven to the Angels. He then played between AA Midland and AAA Edmonton. He went 7-8 on the year, with a 3.52 ERA.

Trudeau then returned to Edmonton and Midland in 1990. He picked up a win in relief in early September for Edmonton. He went 7-4, with a 4.59 ERA to end his career.