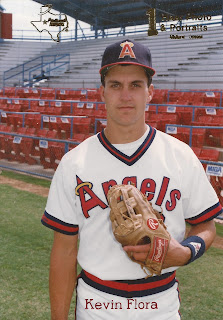 Legendary Philadelphia broadcaster Harry Kalas, in a clip posted to YouTube, takes it from there.

Flora hit that home run on his second season in the majors - four years after his first. He also hit it two years after personal tragedy left baseball the furthest thing from his mind.

In April 1993, Flora lost his wife Mary Ann to a car accident. And it took time for Flora to come to terms with that, he told The New York Times as he looked to extend his career with the Mets in 1996.

"Everybody tried to have their answers: do this, act this way and it will make it better," Flora told The Times. "But time is the only thing that has helped me. If I would have hid behind baseball, I don't think I would be where I am today."

Flora's career began in 1987, taken by the Angels in the second round of the draft out of Bonita High School in California.

It was at Midland in 1990 that Flora met his future wife, Mary Ann. The fell for each other immediately, despite Mary Ann relaying she'd never seen a baseball game, The Los Angeles Times wrote.

Flora returned to Midland for 1991. He hit .285 on the season and got his first call up to the majors that September. He got into three games, saw eight at bats and picked up one hit.

He and Mary Ann then wed.

In spring 1994, The LA Times detailed his long road of grieving and his return to the field.

"I just don't have anything more to lose," Flora told The LA Times as he made his comeback that February. "I've already lost everything in life. Now, I want to do it. This is for MaryAnn."

Still, Flora didn't fully return until 1995. He made it back to Anaheim for two games in May. He then arrived with the Phillies in August after a trade.

"I didn't think I'd see this much action," Flora told The Allentown Morning Call. "I looked at it as a fresh start. I've been given a chance and so far I've taken advantage of it. All this playing time is a bonus."

Flora got into 24 games in all for the Phillies that year and ended with a .213 average. Flora then played two more seasons in the minors, with the Mets and the Astros to end his career.

He has since settled back in Southern California, becoming vice president of operations at Big League Dreams sports park.