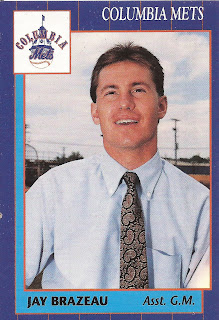 The franchise set to move to Grand Rapids, Mich., for 1994, the Madison Muskies and their general manager Jay Brazeau prepared for the end, according to The Wisconsin State Journal.

Brazeau expected good crowds for the final games, at least, he told The Journal.

"For as bad as (the situation) is, it's going OK," Brazeau told The Journal.

Madison briefly gained a new club the next year, but the trail of Brazeau's minor league general managing career to end there.

A native of Germantown, Wisc., Brazeau's first recorded time in the minors came with his home state club in Madison in 1989.

He moved to the Mets and single-A Columbia for 1990. He served as assistant general manager there. He helped with promotions, operations and sales. He also oversaw concessions.

Brazeau returned to Madison by 1992 and turned team general manager and stayed on through 1993. He commented to The Journal in May 1993 about an issue raised nationally concerning batboys and work schedules. Madison employed four batboys.

"We haven't had any (complaints) and we try and watch (the hours) pretty close," Brazeau told The Journal.

Brazeau appeared to serve as a team general manager again in 1998. A general manager with the same name is referenced in 1998 as resigning from the Western Hockey League's Bakersfield Condors.