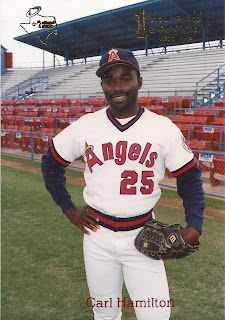 Carl Hamilton had a choice to make in January 1983. He'd just arrived at college, yet the Cubs had come calling in that month's draft, according to The Chicago Tribune.

"I've always wanted to get drafted," Hamilton told The Tribune. "But I hadn't even thrown a pitch (for Triton) yet. I wasn't expecting anybody to call me."

Hamilton ended up turning the Cubs down that month and staying at Triton. Six months later, though, the Cubs tried again and Hamilton signed.

Hamilton went on to play eight seasons as a pro. But, in a career marred by injury, Hamilton made AAA, but not the bigs.

Hamilton's career began that year in 1983, taken by the Cubs in the second round of the June secondary draft out of Triton.

Hamilton started with the Cubs at rookie Pikeville and he did so roughly. He got into five games, starting four, and gave up nine runs in 13 innings. He took one of his two losses in late July.

"I've been throwing the baseball pretty good," Hamilton told The Star that July. "Still having trouble with my pickoff motion to first base and walks. Too many walks. But I'm working on it."

Hamilton returned to the field in 1990 with the Angels at AA Midland. He then split 1991 with the Pirates between AA Carolina and AAA Buffalo. He went 7-7 between the two levels, with a 4.22 ERA to end his career.