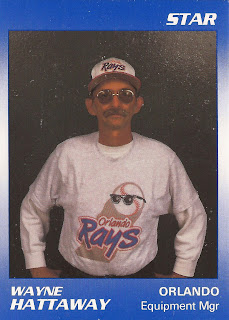 It took Wayne Hattaway a while, but he finally got to see a major league game in 1985.

After 30 years in baseball in some form or another, the Orlando Twins equipment manager got a brief call to Minnesota for the 1985 All-Star Game, according to The Orlando Sentinel.

It took Hattaway a few more years, but he would eventually get to see major league games on a regular basis as a clubhouse assistant in Minnesota.

Hattaway's long career in baseball began as a youth in Mobile, Ala., serving as his hometown team's bat boy.

His professional career then consisted of serving as an equipment manager or trainer in the minors. By 1990, he'd served in Orlando as equipment manager and trainer for 15 years. He served his first 10 years with the club as trainer, according to his Best card.

He then stayed in the minors until 2002, when an old manager of his won the major league managing job with the Twins, Ron Gardenhire. Gardenhire brought Hattaway to Minnesota because he could keep clubhouses loose, according to Yahoo.com.

"He's not here to make you feel good," Gardenhire told Yahoo in 2009. "He's here to keep all of us honest. And laughing."

Hattaway, who earned the nickname "Big Fella," continued with the Twins in 2013, when he had a health scare before returning to work, according to The St. Paul Pioneer Press. He also took a moment to look back at his career, then 62 years strong.

"That's a long time," Hattaway told The Pioneer Press. "You’re not going to find too many people in this game since they were 12."