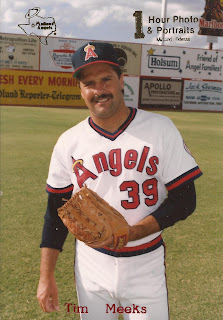 Meeks' fine pitching involved eight innings of four-hit ball without giving up an earned run, according to The News-Sentinel.

"I had excellent control of my curve and slider," Meeks told The News-Sentinel. "Usually when I have a real good fastball I have trouble with my breaking stuff, but tonight I had it going."

Meeks had even better control a couple weeks later for Lodi when he threw a no hitter. Meeks, however, never pitched well enough to make the bigs. He saw nine pro seasons, made it to AAA over six seasons, but he never made the majors.

Meeks' career began in 1982, taken by the Dodgers in the 19th round of the draft out of Santa Rosa Junior College in California.

Meeks played his first season with the Dodgers at rookie Lethbridge. He went 7-4 over 14 starts, with a 3.24 ERA. He threw a complete game against Helena for his sixth win on the year.

Meeks then moved to AA San Antonio and continued his good pitching. He went 14-8, with a 3.48 ERA and made the league all-star team.

He returned in 1990 and played largely at AA Midland. He also saw high-A Palm Springs and AAA Edmonton. He then played 1991 at AAA Buffalo and pitched well enough in July to throw his first complete-game shutout in six years, according to The Buffalo News.

"The thing that they've been talking to me about is slowing my pace down," Meeks told The News afterward. "I'm very quick. I get the ball and I go, go, go. Tonight they held me back."