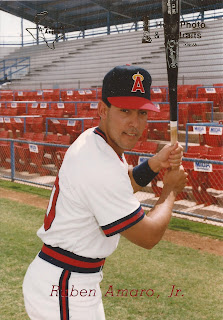 Ruben Amaro, Jr., made his major league debut for the Angels in June 1991, saw time in one game and then returned to the minors.

To The Philadelphia Daily News in July, Amaro explained his optimism at returning, citing conversations he had with Angels officials.

"When I got sent down, I spoke with (manager Doug) Rader and the general manager Mike Port," told The Daily News. "They basically apologized for not giving me a chance. It sounded like I was going to get another chance to come up, if not soon, then maybe when they make September call-ups."

Amaro did get called up again that September and he saw regular time in the bigs over the next seven seasons.

After his playing career ended, though, Amaro eventually continued having such conversations as he had in 1991. Only he had them as general manager himself. He served six sometimes turbulent seasons in that role for the Phillies, before turning to coaching.

Amaro's career began in 1987, taken by the Angels in the 11th round of the draft out of Stanford University. Amaro is the son of former major leaguer Ruben Amaro, Sr.

Amaro started at short-season Salem. He moved to single-A Palm Springs for 1988. He split time in 1990 between AA Midland and AAA Edmonton. He then got his first look at the majors in 1991.

Amaro then saw limited time over the next three seasons with the Phillies and the Indians. He hit a game-winning single for the Indians in July 1995.

"I wanted to hit it hard, but I just kind of blooped it in," Amaro told The Associated Press afterward. "Right now I'll take anything I can get."

In the ensuing years, the Phillies descended down the National League power list and Amaro caught heat for the slide.

"I always felt like that was part of the gig," Amaro told The Press of Atlantic City after his tenure concluded of being criticized by fans. "In Philadelphia, that's what happens. You're under a great deal of scrutiny. I don't think anybody likes to get ripped. It's an occupational hazard."

Amaro has since stayed in the game as first base coach for the Red Sox. He continues in that role in 2017.