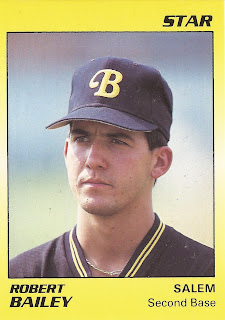 To The Pittsburgh Press in June 1989, Rob Bailey compared his style of play to his father Bob Bailey's.

The elder Bailey spent 17 seasons in the majors. The younger one was just starting out.

"I'm a totally different player," Rob Bailey told The Press. "He was a power hitter. I'm the perfect type of turf player."

Rob Bailey went on to a career that spanned six seasons, but he never followed his father to the majors. He made it briefly to AA, but got no higher.

Bailey's career began that year in 1989, taken by the Pirates in the third round of the draft out of Fullerton College in California. Bailey was also credited by his formal name, Robert Bailey.

Bailey started his college career at San Diego State. He hit .375 there in 1988. He then transferred to Fullerton, where he knocked in a run in a March 1989 game.

With the Pirates, Bailey's career started off on the sidelines, downed by strep throat. He played the year between single-A Augusta and short-season Welland. He stole three bases and scored two runs in a July game for Augusta.